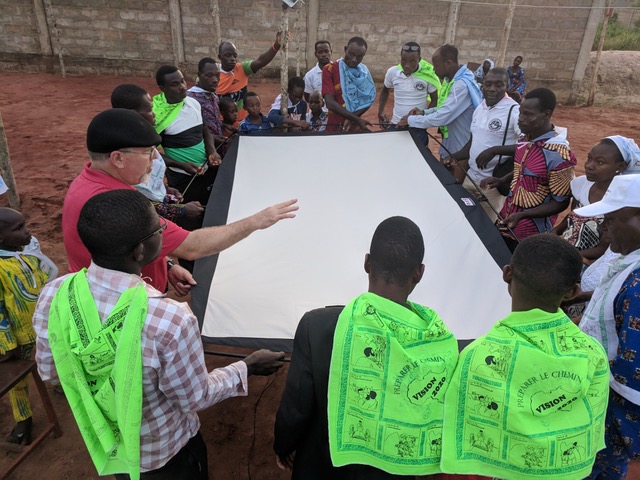 The sweat dripped from my brow as I sat in the small church in a town called Tsévié just outside of the capital city of Lome, Togo.  The morning sun had risen early and another warm Sunday morning in West Africa burst into light as we heard roosters announcing the start of a new day.  We had made our way out of the city with Rev. Yaovi Landoukpou, a captain in the Togo army by profession, but a pastor and district superintendent by service to the Lord.

We soon made it to his home church, the first church of the Nazarene in Togo where only 10 years ago, he had in faith begun his church on the front porch of his father in laws home.  The faithful believers had grown in number, and their passion to win the lost has never faltered even though they have faced many obstacles.

This new church had become the mother church and began planting daughter churches in near by communities.  Using the Jesus Film they had successfully planted more than 6 churches and this year have their target on starting 3 more.  As the pastor, Yaovi had proven his faithfulness by raising up other leaders and encouraging them to now lead their own churches under his mentoring. 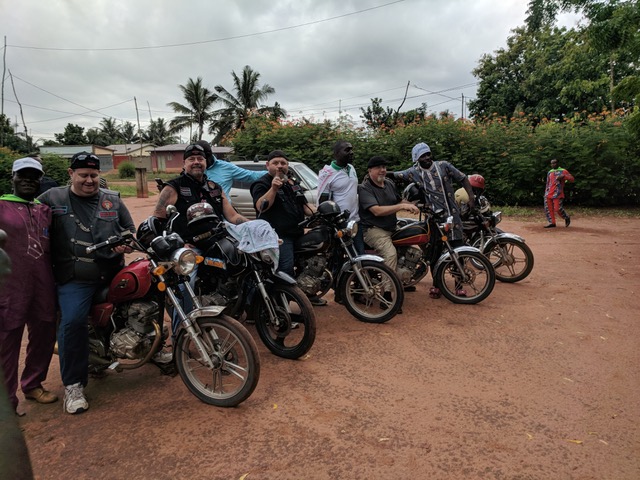 I was joined by three guys, led by Joe Drake who is a leader in the Bikers for Christ motorcycle club.  Joe, Malcom, and Richard had agreed to pay their own way and bring each 3 sets of Jesus Film Equipment from the US to Togo.  I had met them in Accra, Ghana and together we crammed into a van with all the equipment and had successfully crossed the border on Saturday, delivering the equipment to our Jesus Film teams and leaders in West Africa.

The equipment would soon be serving as critical tools of evangelism to help plant churches in Togo, Benin, and Niger.  We had arrived at the church in the city and spent the afternoon training the teams on how to use this new state of the art equipment.  The team members soaked up every detail on how to use and care for the equipment.

We then jumped on motorcycles and drove to the edge of a new community on the suberbs of town.  Here the church had been focusing on planting a new church.  A local landowner had given them usage of a plot, and they had built a simple wood structure that would serve as the future worship structure for this new fellowship.  On our way to the new site, the local pastors and leaders had given us their motorcycles.  Each one was wearing a story scarf around their shoulders like a cape. 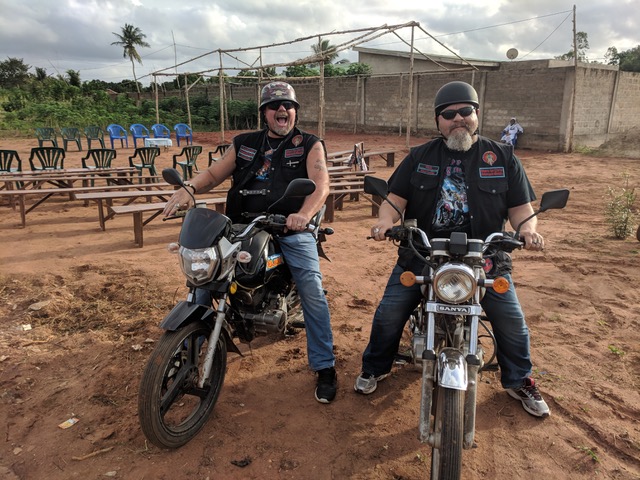 It was like a parade of joyful celebration.  The American guys looked like elephants on unicycles as they had traded in their normal Harleys for Chinese made 125cc small motorcycles.  The spirits however were flying as high as the scarfs because for a brief moment we were neither American nor African, male nor female, rich nor poor, but simply brothers and sisters in Christ with the single goal of winning others into the kingdom of God.

The screen was hung on the pole structure and for the next few hours under the night sky, Jesus was lifted up.  People from the neighborhood wandered in to see what has happening and stayed to follow the story.  In a place where superstition and witchcraft creates fear and submission, people watched the truth about redemptive grace.  They found truth in the story, spoken by Jesus himself in a language which they understood. 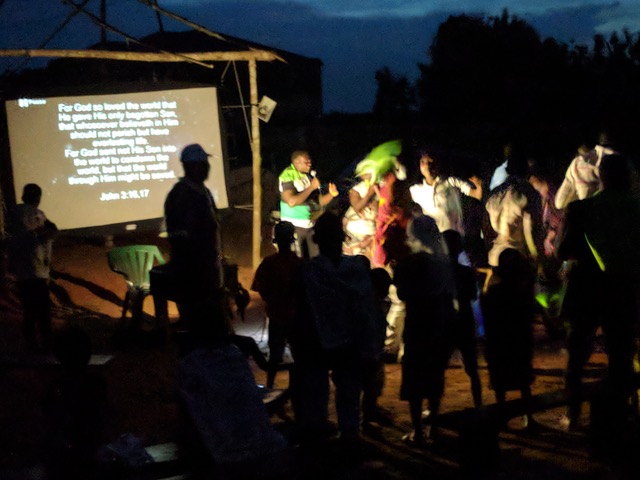 At the end when the pastors offered a prayer of a deliverance from the burdens of sin in their lives, 21 people chose to allow Jesus to become Lord of their lives.  Among them was a young woman who asked for special prayer.  For many years Fatima had suffered from blackouts.  When she went to the gardens to work, she would at times see a black bird appear and cry out then find herself overcome by oppression and then pass out.  When she awoke from this black out she sensed something like a snake that would pour out of her mouth and slither away.  She believed she had been cursed with an evil spirit and desperately was seeking freedom from this bondage.

We laid hands on her, and Joe anointed her with oil as we prayed for her deliverance.  The next day she had brought all her items of witchcraft from her home and the leaders burned the items and she testified that she no longer felt the oppression that has dominated her life.

It was stories like this story of Fatima that had the people rejoicing and singing and dancing in the service that morning.  Jean Marie had led the whole congregation through the story of Jesus calming the storm.  The whole church was filled with color that morning.  Almost every person in the room had a story scarf around their heads or neck because they had been memorizing the stories that were told about Jesus.  From the youngest to the oldest person in the room, we heard their responses of the questions about what they liked or didn’t like about the story. 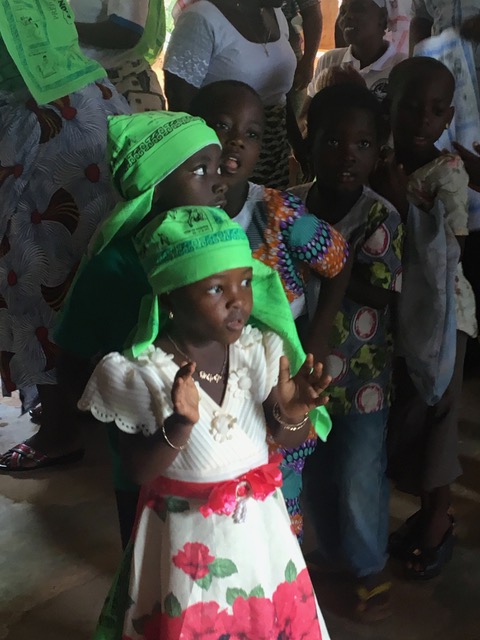 This church was discipling their people through story telling.  This was another reason why this church was growing; because people all around that community know that this church teaches about the bible.  In the midst of the morning celebration, suddenly the drums changed beat, and from the back of the church came all the children dancing and singing.

The lead girl was this little angel, dressed brightly with a story scarf on her head and the brightest smile on her face.  They danced and whistled and truly made a joyful noise unto the Lord.  I saw a second generation of believers in a mostly oral culture celebrating their faith in Christ.  What a statement of faith and hope.  In a place where many times survival from disease, hardship, and oppression is all people can focus on, came a breath of hope, life, and love.  Because of Christ these believers have found strength in their own lives and are committed to reach others to share this same hope.

The days had passed by quickly but we celebrated the joy of salvation that morning.  No sacrifice that we had made to get to this small church seemed like much 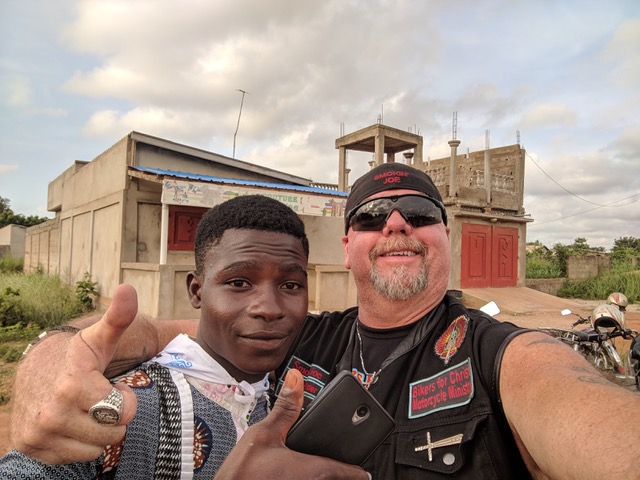 after we had been so blessed to be with these friends and fellow believers in the family of Christ.  Together we have made an impact in the lives of that community.

I believe that investing in the lives of these faithful leaders is a worthy cause.  Equipping the saints for works of good service is all part of being an international church with a passion for reaching the lost.  The simple question remains.  What are you going to do to make disciples in the nations?  Sure you could just hope that someone else will step up and serve and meet the need.  Or you could decide to be used of God to impact a community.

Make a sacrifice!  Take a set of equipment to our fellow believers and leaders across the ocean and to the shores of Africa, or help to finance someone who is willing and available to go.  One day there will be a celebration dance before the throne of God, and the long line of generations from every tribe and nation will dance before the Lord.  Will you be there? Or will someone be there because of what you did?  Oh how I want to be in that number!  How about you?