Speaking to the Heart 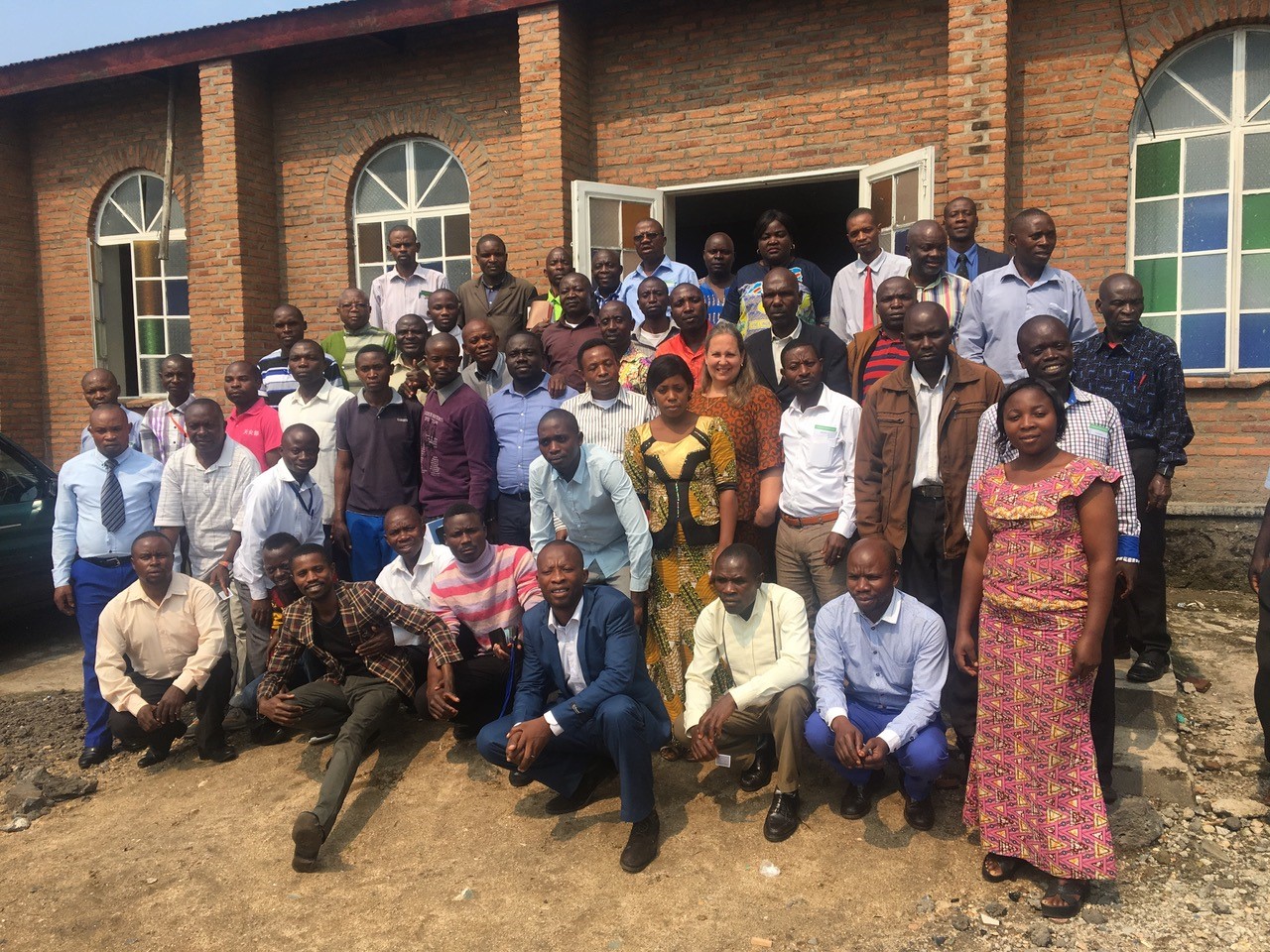 Dropping down through the clouds, the sun shimmered off the surface of the deep blue lake.  The shoreline served as a tan border to the picturesque scene as it faded into the bright green lush forest rising into the hills and eventually topping out into the black lava rock mountaintops.  Straw thatched huts speckled the rolling hills between neat rows of gardens of the local villages.  The endless line of banana trees looked like a thousand glistening clovers dropped there just to top off the most beautiful picture you could imagined.  God must have had an especially creative end in mind when we forged this part of the world into existence.

A flood of memories swept over my mind.  I was taken back in an instant nearly twenty years ago when with Faith on Wings I had flown the Nazarene Mission Aviation airplane into this very valley.  I was once again over Lake Kivu and about to land in Goma, the Democratic Republic of the Congo.  In 2002, I had made this flight to help after the disaster of the volcano eruption.  The hot lava had burned through the city taking everything in it’s path.  It had poured into the lake extending the shoreline and actually lowering the water level due to the evaporation of the lake as it quenched the heat from the flowing lava.  Schools, homes, and churches had all met with the same fate.  Burned beyond recognition and now lay several meters under the new street level created by the cooling rock.

In those days, I stayed with the local district superintendent Rev. Jacques Balibanga in his home.  We did our best to get food to the displaced families, petitioned the UNHCR for tarps so that we could rebuild temporary school buildings and places of worship so that little by little the people could start putting their lives back together.  It was a time I will never forget and will cherish those moments of fellowship with people who had once again lost everything but still managed to keep hope in their life and praise on their lips because God had spared their lives.  From war torn rebel territory, and now natural disaster from the volcano, some how they could still keep their hopes alive and praise their God. 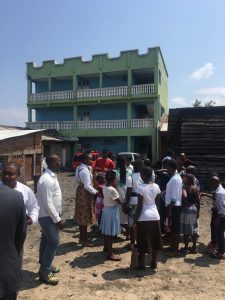 Our mission this week would be very different.  As we cleared customs and immigration and all the normal hassles of entering a country with Jesus Film equipment and orality materials for our churches, we met our brothers in Christ who were so glad to have visitors.  Over a two-week period we had met leaders in the southern tip of DRC in the bustling city of Lubumbashi and now we were about to meet the leaders from three districts around lake Kivu.  There were young leaders from Bukavu, Virunga, and central Goma.

I noticed right away how much more modern the city has become.  The city streets were wide and paved, there were new hotels built all the way to the shoreline, new schools developing in the city, and bustling metropolis of merchants and vendors.  Our churches were also so much more developed.  Right on the main street in the city stands the Zanner Institute and district center where we would do our training.  This is one of the best-known schools in the city and has served as a base of development for the church.  Still expanding, new offices were being developed and a recording studio established on the second floor to record music and develop audio materials for oral learners as the Church of the Nazarene adapts it’s strategy to meet the needs of urban ministry.

The church has rapidly expanded into now three districts in this area with more growth planned.  Most of the churches planted here have been planted by the Jesus Film teams faithfully showing the story of Christ in the local languages of Swahili and Lingala which is impacting peoples lives.  The new equipment today is being driven into the jungle on motorcycles and shown in places where there is little or no electricity and they are able to connect with people groups that have not really heard the story of Jesus in their own language.

Most people make their deepest convictions and beliefs in the language that they were born into.  Oral cultures have passed down from generation to generation a world view based on oral traditions, local proverbs of wisdom, and superstitions and beliefs that have been reinforced from one family member to another.  If you really want to speak into the heart of a person then you must speak the language of the heart.

With this in mind we have worked with Spoken Worldwide to develop a program of storytelling training that is helping the people of our churches to share the bible in their heart languages.  Our method 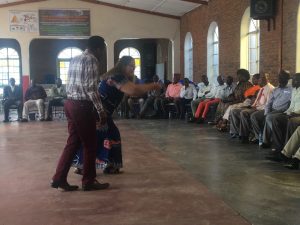 engages everyone in the room, and draws the truths out of the bible through discovery rather than through systematic teaching.  It takes longer, and it is more intense as emotions get involved and people share what they really think, but the end result is people begin to set new values based on truth in a way that anyone can remember it and share it with their neighbor.

We had four full days of training and most of the 58 people that attended the Goma training went away knowing 8 to 12 stories by heart in their own language.  They were both inspired and motivated to go take this form of oral discipleship to help shape the spiritual lives of both new believers as well as old.  “This is taking us back to our own culture” said one attendee.  “I have already started telling these stories to my children and they were answering the questions and speaking up like I have never seen them do before,” said a mother who is also a pastor of one of the local churches.  “We will empower the women of the church to share these stories with their neighbors in the villages,” added another pastor who is starting new work in one of the most remote regions of the area and where practically all of the people in their new churches can neither read or write in French or even Swahili.

This coming month we launch a new boat ministry in the DRC.  Along the great Congo River lies some of the densest jungle you can imagine.  Areas along that river are not even accessible by motorcycle.  Their sole connection with the outside world is the river.  Thanks to our partners in ministry, Jesus Film Harvest Partners, we now own a boat.  The first team will take its inaugural voyage up the Congo River to show the Jesus Film in areas where they have not been able to reach nest month.

As they meet these remote villages, they will share the stories of Jesus not only with the film, but also by sharing these very bible stories that will teach them the truths about the Word of God.  Will you pray with me that these new storytellers will be protected as they go?  They are fighting not just a physical battle against rebels, against wild animals, against diseases like Malaria and Ebola, but they are fighting a spiritual battle against the very strong holds of darkness that have not seen the light of truth possibly for generations.

9 “As the heavens are higher than the earth,
so are my ways higher than your ways
and my thoughts than your thoughts.
10 As the rain and the snow
come down from heaven,
and do not return to it
without watering the earth
and making it bud and flourish,
so that it yields seed for the sower and bread for the eater,
11 so is my word that goes out from my mouth:
It will not return to me empty,
but will accomplish what I desire
and achieve the purpose for which I sent it. 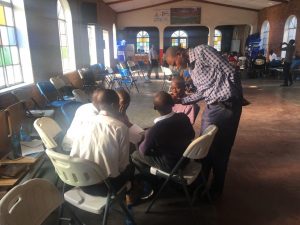 Let us continue to lift up our brother’s and sister’s in Christ in the DRC as they face enormous challenges and yet continue to persevere with joy and grace. 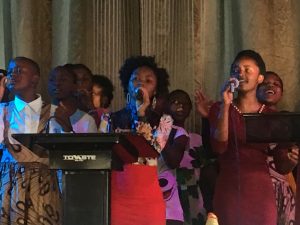 Our final service with the church they sang a familiar song that I remember from the days when I was in the DRC all those many years ago; “Mwamba, Mwamba Yesu ndiye Mwamba!” Jesus is my rock!  Every street and garden and hillside in Goma is filled with lava rock.  What an appropriate song that reminds us that even though the rock beneath our feet in Goma can even melt and flow like a river in destruction but the only rock that never changes, that never fails, that never destroys is the Rock of my salvation, JESUS CHRIST!

Praise God for our leaders, for our partners, and for your prayers that keeps the story of God moving from village to village, city to city, and nation to nation.  May God find us faithful until the end spreading the gospel through the discipleship of all nations.