The afternoon sun had made the air feel heavy and oppressive.  I stood next to the 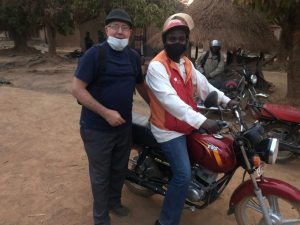 125cc motorcycle that had been donated by the Jesus Film Harvest Partners to this DRC Jesus Film team.  I stared at Pastor Aime Mutombo Nawej who was the JF coordinator for this district.  He had on a jacket with a bright orange stripe to make him more visible, but I couldn’t imagine how he could stand the heat in that long-sleeved outfit.

We were told we had three motorcycles for our adventure, so I jumped on behind Pastor Aime and saw Rev. Nzola Dieumerci, the Jesus Film coordinator for the Africa Central Field get on the other, and Rev. Celestine Chishibanji, the DS for this South Katanga district mounted the last steed in our quest.  Like knights riding out to battle we departed the inner city of Lubumbashi, and wound our way on the dusty potholed roads and paths for the village of Siloé just outside the city limits.

Immediately I was reminded that I am no longer as young as I used to be.  The skinny long seat was barely big enough to keep me from riding my tailbone on the metal rack at the back of the bike.  With each pothole, speed bump, and rut in the dusty dirt road I soon felt like I was riding a bronco and not a motorcycle.  Soon the others had disappeared and I was wondering if we would ever catch the others, and at that point I really had no desire to.

After stopping at Pastor Aime’s church so I could see his family and the school that was developed in the community as a child development center, we continued to the village where we were to meet a recent church plant.  As we approached the final leg of the journey, I realized that now my clothes, hat, and face was covered in a layer of red dust.  We finally arrived at the little village of Siloé and stopped near a large mango tree. 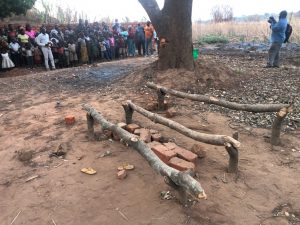 Beneath it were logs that used to be the pews of the new church that had started there less than a year ago. 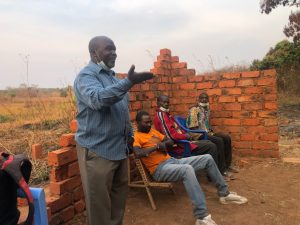 From a partially raised red brick building just next to the tree I could hear the shouts and praises of a group singing and praising God in their language of Swahili.  The young pastor Félicien was at the head of the assembly and he was wildly clapping his hands and dancing to the Lord.  The whole crowd of young men, women, and lots of children had a joy in their hearts that could not be contained.  They shouted, clapped, and sang as we were ushered into the new partially built church.  At the front was the three elders of the village who had been called to officially welcome us the visitors. 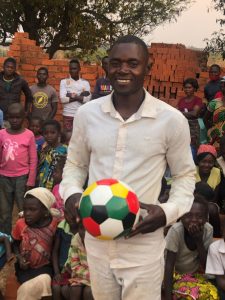 The pastor had a bright multi-colored soccer ball in his hands.  It seemed that this gathering of new believers had not only responded to the gospel shown by the Jesus Film, but that the youth and children were meeting regularly through sport and special activities.  Though young in the faith, this church was already making an impact in their community.  The elders of the village had welcomed the church donating 4 hectares of land.  Indeed, a good church plant and already a plan to not only build this little building but also cleared land for the kids to play soccer on and fields to plant seeds with the hope that the harvest would then support the purchase of iron sheets to cover the roof of the new church.

I looked out over the crowd with inner satisfaction that I was somehow privileged to be a part of this process of church planting.  I thought of the thousands of donors just like my mom who faithfully give every month to the Jesus Film ministry, trusting that those donations will yield a harvest in some remote place in the world.  And here it was in living color! 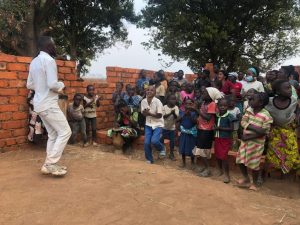 Rev. Celestin through his evangelistic heart and love for kids had nurtured Evangelist Pastor Aime, who had planted a local church in his own area, then expanded and raised up Pastor Andrê who planted the Nuef de Gloire Nazarene church, which in turn had now planted the Sinoé church with Pastor Félicien.  I was looking at the great granddaughter church of the Nazarene.  Four generations of church planting that demonstrates that the love of Christ can impact our world when we are ready to leave our comfort zone of grace and reach out to the next community that also needs this message of grace. 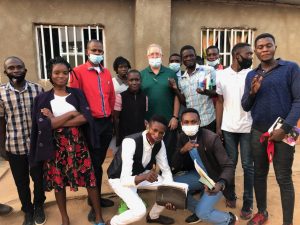 We prayed a blessing on the church and its new leaders.  We made our cultural goodbyes by shaking hands with the all the leaders and taking photos with the new church people trusting that God would continue to bless their community and help them to reach the next community for Christ.

Though I was sore, I crawled back on the motorbike, and we made our long trip back to the city and to our hotel where electricity, running water, and a soft bed waited for us.  It was now dark so the dim headlight from the small motorcycle flashed back and forth across the dips and potholes and my driver was doing his best, but I felt the pain of every bounce as we hummed back through the dark towards the city.

At last, we made it to our destination.  I took a cold shower to run off the dust and refresh my body.  I took a couple ibuprofen for my aches and collapsed on my bed after four straight days of training, and now a day of traveling and visiting the churches.  It was my first trip in over 18 months due to the Covid pandemic, but I was so glad I had come.  This district now had a new set of Jesus Film equipment that I was able to deliver.  The orality team had been trained and given a zoom recorder and they were excited to begin recording stories in their local language that would help disciple new believers.

As my thoughts turned towards my return trip home, I gave thanks to God for the faithfulness of these leaders who despite the challenges, the lack of funds, the obstacles that could keep them from planting new churches, they were obedient to the call of Christ.  They had responded to Christ call, “to go and make disciples of all nations, baptizing them in the name of the Father and the Son and the Holy Spirit, and teaching them to obey everything that I have commanded.”  Will you not join me in praying for these leaders?  Truly, we praise God for all he is doing in the country of the Democratic Republic of the Congo.